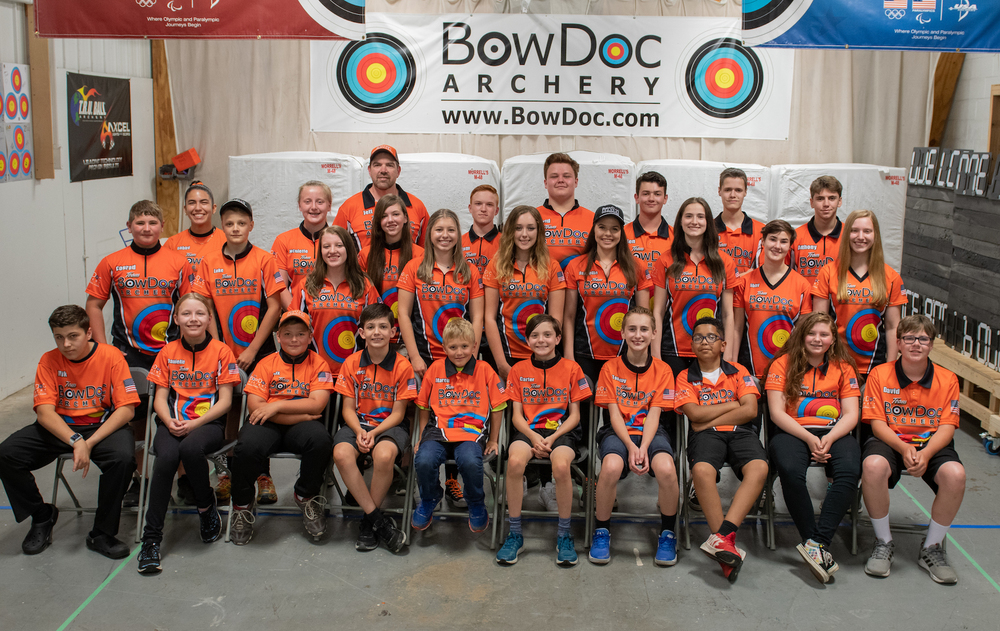 BowDoc Archery, a local Archery Shop and Range in Mokena, is home to some of the top archers in the country, including a number of Lincoln-Way 210 students!

Owner Jeff Sanchez has been involved in Archery for 45 years, and coaching for more than 25 years. He opened BowDoc Archery in Mokena in 2016, and coaches competitive youth and adult teams.

Five Lincoln-Way students, and one former student, are all on the advanced competition Team BowDoc- JOAD (Junior Olympic Archery Development).

Lincoln-Way West sophomore Ben DiPasquo got a bow for his 10th birthday, and is now one of the top Archers for his age group in the nation. He holds an Illinois state record for 25-meter shooting, has won a State Championship, and recently placed fifth at the Vegas championships, where shooters from all over the country and world compete.

“It’s a self-centered sport; it relies on you holding your own weight. I find that to be enjoyable. I’m going to do my best and how I do is how I do,” said Ben. “Everybody is always super nice; people from other teams cheer you on. It’s a different experience than I feel like a lot of sports. You’re not in a big stadium, but they’re all rooting for you.”

“My favorite part of Archery is the competitive atmosphere,” said Cassie. “I enjoy shooting against people from all over the United States, as well as shooting with my friends at a more local level. It feels good when your hard work pays off. Archery requires a strong mental game as well as physical endurance.”

Cassie is also a member of the Lincoln-Way West Varsity dance team, and would like to find a college where she can continue archery on a competitive level, as well as dance.

Jade is one of the top 10 Olympic style shooters in the country in her age group, winning first place in the State Indoor and Outdoor Championships and finishing ninth at the Vegas championships. Jade is one of the team captains and also works at the shop, helping teach Intro and Park District classes, and helps coach the beginner and intermediate team sessions for Team BowDoc Archery.

“I got into Archery I think how everyone gets into it, I saw movies where the main character used a bow and I thought it was super cool,” said Jade. “I’ve been shooting for a little over six years now and I really just love how focused I’m able to get while I’m shooting. Archery is a sport where you have to be extremely consistent, and I think that has carried into my regular life as well.”

In addition to competitive teams, BowDoc Archery also has lessons for children and adults. Lincoln-Way West students may see a familiar face at the range, West Science teacher Keith Huizinga.

“When I encounter a student or students at the Archery range we are equals,” said Mr. Huizinga. “I am a student there just like they are a student at Lincoln-Way. Now, most of them are better shooters than me, but that is beside the point. Ultimately, I do not want to be a distraction to them because Archery requires great focus and everybody is there to learn and improve.”

Ben says he had a lot of practice during COVID-19, and made a makeshift range in his yard to practice. He recently received his JOAD Star Silver Olympian Pin (about the size of a penny), only one arrow off from the Gold.

“It has a lot to do with your mental vs physical. If you’re not thinking about what you’re doing at the moment, it can throw your shot off. You tense up,” he said. “It ends up messing with your head a bit. Once you fire your arrow, you have to let it go. It can really screw people up.”

The students in the program also do community outreach events each quarter, where they volunteer time in the community, like the spring cleanup event at Camp Manitoqua in Frankfort and helping to process donations at My Joyful Heart in Mokena.

“The program itself is very much a social and personal development program as much as it is an Archery program,” said Coach Sanchez. “The focus is on the person and their development in areas of confidence, respect, communication, interactions, etc. We often work on these type of personal skills and are always discussing how the things we work on in archery can be applied at school and home. The program is a very structured, high performance training program.”

In addition to owning BowDoc Archery, Coach Sanchez is one of the USA National coaches and trains shooters from all over the country. In 2015, the U.S. Olympic Committee awarded him with the National Archery Coach of the Year Award.